ARE YOU READY FOR SOME FOOTBALL?  Well, Elizabeth was super duper excited to have a special guest join our family for Super Duper Bowl Sunday.   It all started when I made a quick trip to the party store to pick up some fancy football plates and ended up coming home with a very special guest.  So who was the special guest?  Well, when I got home the girls were playing in the bathtub.  I went beep boopin’ into the bathroom with our special guest in one arm and my ipad in the other playing… “Me plus you, I’m a tell ya one time, me plus you, one time, one time, Girl when I met you my heart went knock knock, now those butterflies in my stomach won’t stop a stop…”  So did you guess it yet?  OMB!  YES!  The one the only the BIEBILICOUS… Justin Bieber!  The girls were freaking out!  Justin Bieber was in our house!  WHAT THE WHAT?  I can never get them out of the bathtub, but yesterday, who knew sparkles would fly so high and they would come jumping out in rainbow colors.  Normally, we would be primped and ready for such eye candy, but sometimes winging it is the best way.   It’s the EBB way!  So you are probably wondering what is Justiin Bieber like, right?  Well, what I can tell you is that he was extremely quiet.  In fact, he did not say a word!  He sang lots of songs like Baby Baby and Never Say Never.  They sounded just the same as they always do.  Perfect on the ipad.  I must say, I expected his skin to be very smooth and cozy like Kevin Jonas, however it was more like sandpaper, cardboard actually.  He was wearing red pants, so we assumed he was rooting for the Giants.  Bryce was pleased because he also was rooting for the Giants.  He had made a bet with his Papa earlier that day for $5 that the Giants would win, and now that the Giants have won, Bryce has yet another $5 dollars coming in the mail.  However, Bryce informed his Papa yesterday, that he prefers to be paid in 2 dollar bills, so I’ll have to let you know how that turns out.   He may just get an extra dollar out of it?  We also had JB assist Elizabeth in picking the winning ticket for the signed Arizona Cardinals Patrick Peterson football, which went straight to You Tube.  Congratulations are in order to Mike Kenison.  Mike Kenison is down with EBB!  When Brooke spoke with him yesterday, Mike told him that he wanted to give the football back to EBB!  So awesome!  A BIG Sparklicious THANK YOU needs to go out to my marvelous friend Missy for getting that fabulous football to raffle off for EBB and to everyone who bought and sold tickets!  Especially to MK for making an awesome TOUCHDOWN for EBB in the end!!  We were able to raise over $700.00 for EBB Foundation!  Breaking out in cheer now…Rah Rah Ree Kick Lymphoma in the Knee, Rah Rah Rass Kick Lymphoma in the Buttcrack!!!  Hurkie, Hurkie, Side C  (aka Kicking, Kicking Cancer) 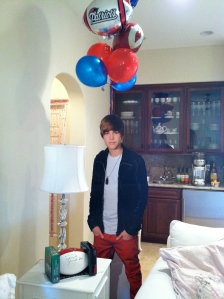 We have officially started Phase 4.  One day of steroids and they have already kicked into high gear.  Elizabeth’s request for breakfast was Spaghetti O’s.   And while she was waiting for the Spaghetti O’s she wanted PeaNut ButTer JellY PeaNut ButTer JellY….She is now eating and the freezer is stocked with frozen pizzas for the midnight cravings, which I’m sure are right around the corner.  So far, things are going so good.  She received chemo yesterday and will return on Thursday for more chemo and then Monday again.  We also received news that the 4th Phase will be longer than we originally thought.  It will be about 2 months not counting delays.  Very low counts are anticipated and we are prepared for things to look yucky for a little while.  Brooke and I also decided to take Bryce and Kate to the clinic yesterday to see what Elizabeth does there.  They got to meet all of Elizabeth’s doctors and nurses.  Elizabeth also gave them the total tour of the PCH clinic but what they were most excited about was where to get those otter freezer pops she keeps telling them about!  Brooke and I want the kids to know that as Elizabeth will not be feeling well, it is all planned and to not worry.  These kiddos worry a lot these day.  It’s not something they should have to worry about, but it’s their baby sister and they do.  So the doctors said the hair we have been so excited about lately will start falling out again.  Elizabeth has been wearing her Dorothy wig when we leave the house, which is the first time I have seen her not want to show off her bald is beautiful look.  Either way we are really proud of her for handling everything like a rockstar!   Speaking of handling things like a rockstar, Elizabeth is doing an awesome job with the “YUCKY” medicine again.  Some of you may know, from early in Elizabeth’s treatment, she had to take “Yucky” medicine.  It was very much a challenge and eventually led to an NG Tube being placed.  I don’t believe that will be the case this time.  She is taking a heavier steroid, twice a day now, but she’s a pro at this and vanilla ice cream is saving the day!  She is doing awesome and so here we are once again, breathing in and letting go and praying all goes well. 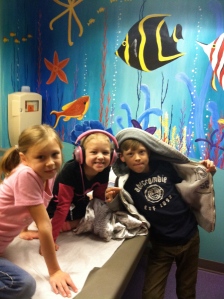 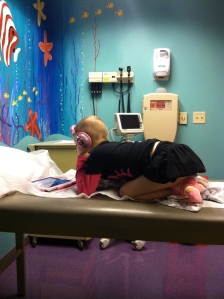 I just want to take a moment to thank everyone for your continued support and tell you how much we appreciate all of you following Elizabeth’s updates and continuing to help kick cancer where it counts.  I really miss the comments that used to flow steadily on carepages.  The blog is no different, so contnue to read, continue to pray and continue to comment!

AND THE WINNER IS….

Look what we got today