Is he a real life port fairy? 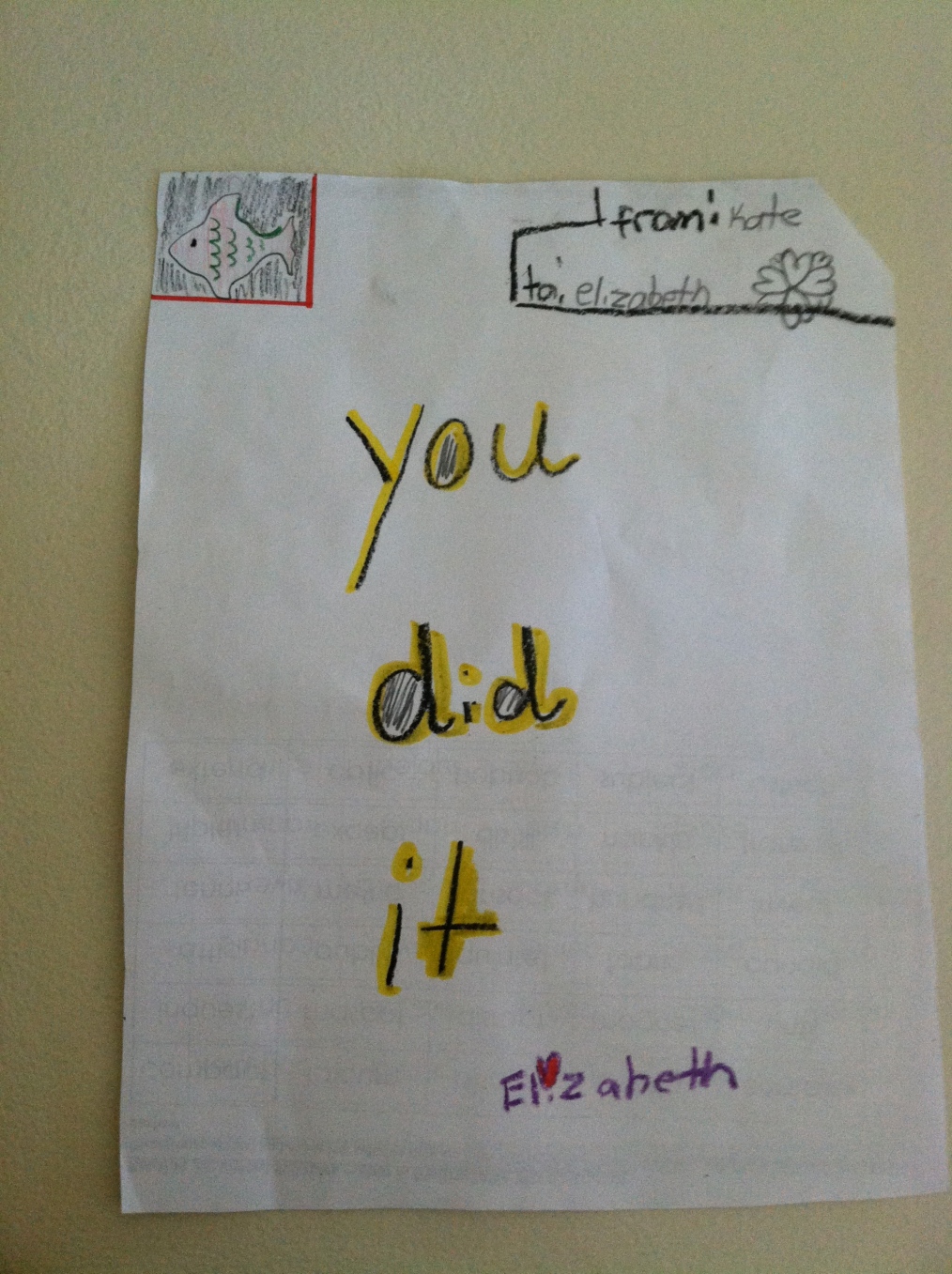 Elizabeth has been counting down the days.  Not the days I would have ever expected to be counting down with my daughter.  She was not counting down the days until Halloween or the days until Christmas, not even the days until her next birthday.  She was, however, counting down the days until this small button under her skin that she refers to as “my a-port” was finally coming out.  Not a typical countdown for a six year old, but as equally exciting for a child battling cancer or any other blood disorder who have received a port for that matter.  It has been such a focus of her life.  “Be careful, don’t bump your port.”, “Watch out for your port.”, Come and let me put cream on your port, Ok we are going to access your port.”  “Port this and port that.”  In many ways it has made her treatment much easier, but her flesh is scarred from needle after needle after needle.  It’s through which she received her first chemotherapy, as well as the year of treatments week after week to follow.  It’s through which she received her first blood transfusion and so so many more after that.  It is her ultimate battle wound.  It has become a part of who she is and will be forever.

Friday morning I dropped Bryce and Kate off at school.  They were super duper excited for their sister!  When I got home from dropping them off, my sleepy eyed Elizabeth had finally awoke.  She was nervous, asking all sorts of questions.  How do they get it out?  Do they use a knife?  What does the knife look like?  Will I feel it?  Will it hurt?  Will I have sleepy medicine?  Do I have to get a pokie?  What color is my port?  From there we started making bets on what color her tubie and port would be?  Elizabeth and Daddy both guessed silver and gray with a clear tubie, my guess was purple everything, but only because I googled port surgery and watched a 6 minute video on You Tube so that I knew exactly what was going to be happening to my EBB.  I watched in horror, covering my eyes leaving only a sliver of my fingers apart, just enough to be able to see what was happening.  It was like I was watching a scary Halloween horror flick, but like my friend Sandra says, “as scary as Halloween can be, CANCER is so much more terrifying.”  My kiddos sang it plenty of times and I will say it again…It is a terrifying nightmare! 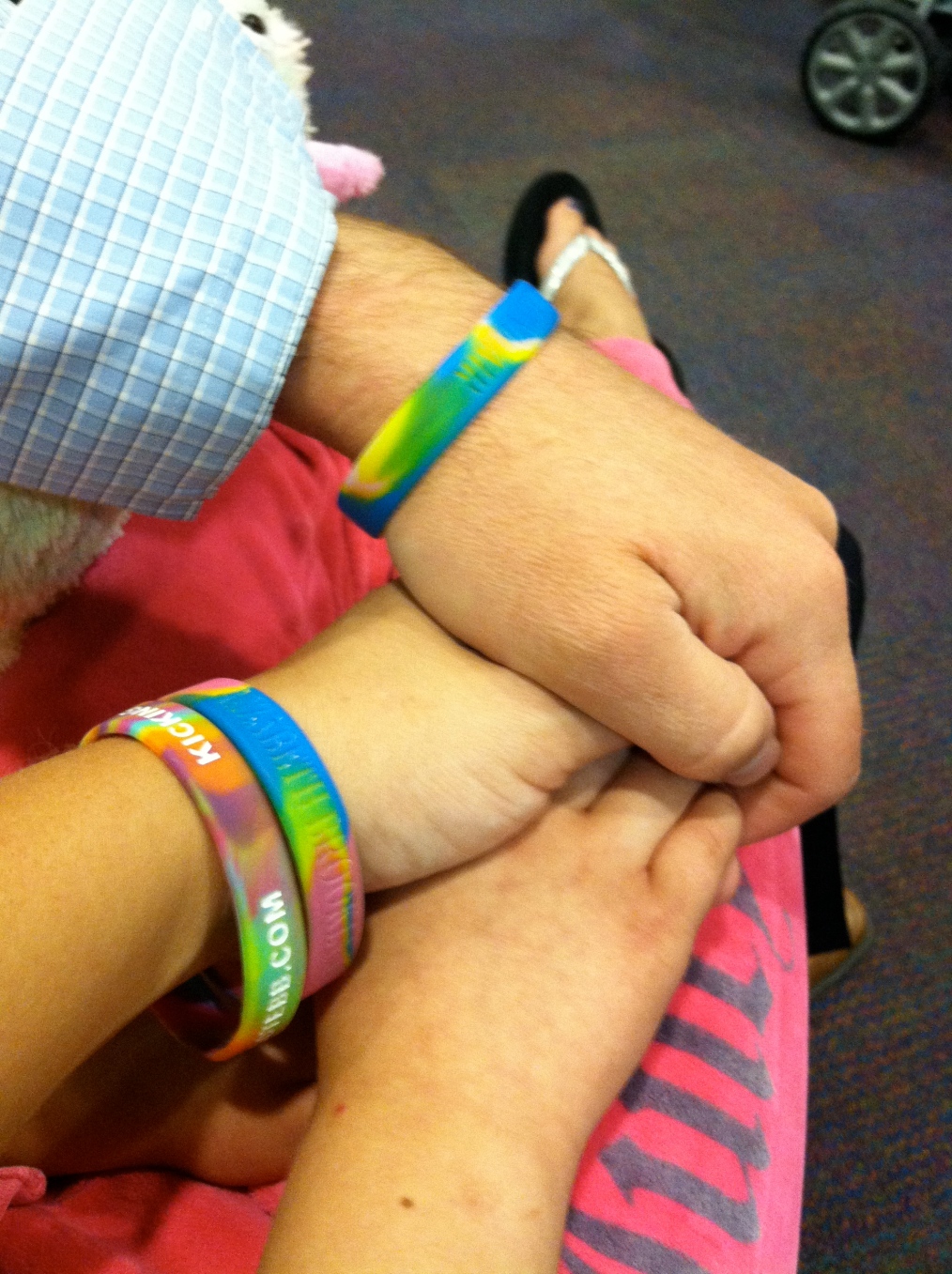 So, it finally happened after months of speculation, Elizabeth finally had her port removed on Friday morning.  She was so very nervous, but so excited at the same time.  We all know how much of a brave kid she is and yes yet another awesome milestone for the record book!  Before she went in, her surgeon Dr. Acosta came by to say hello.  I said to Elizabeth, “Elizabeth meet your real life port fairy.” She looked at me the same way she looked at me over a year ago when I told her that beauty comes from her heart…She looked at me completely confused.  I don’t know if she was more confused about his human form or the fact that he was well a HE.  She then turned and smiled, as she posed for a picture and as he walked away she looked at me with her crazy bewildered look and said, “Is he a real life port fairy?” 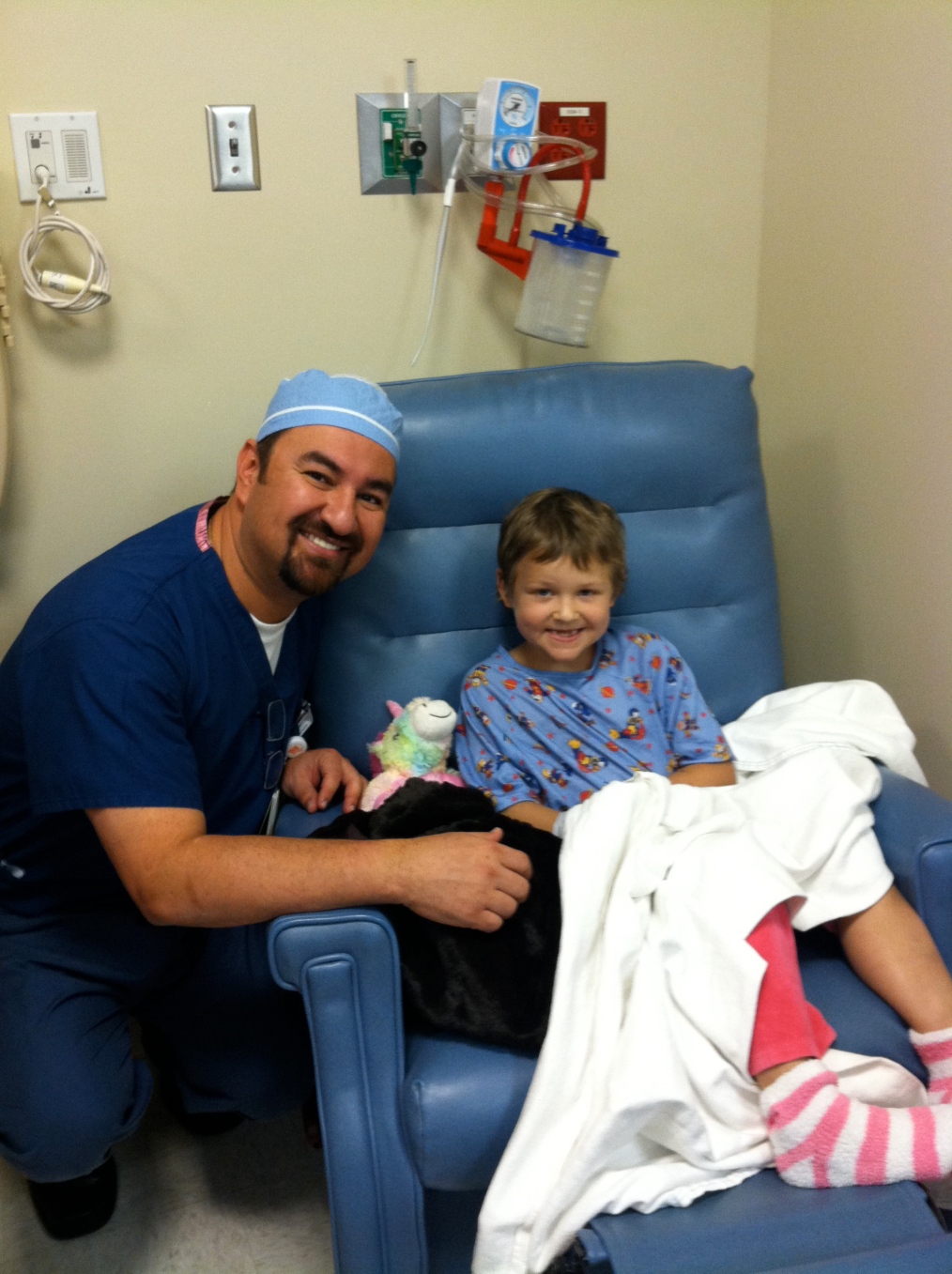 According to Wikipedia “A Fairy” is described in modern culture as young, sometimes winged, humanoids of small stature, but they originally were depicted quite differently: tall, radiant, angelic beings, any magical creature, good folk, people of peace.

Absolutely, YES, he is a real life port fairy.  He was tall, radiant, brought a little more peace to our life, and a good folk that was angelic in everyway who makes stainless steel ports appear in plastic bags. 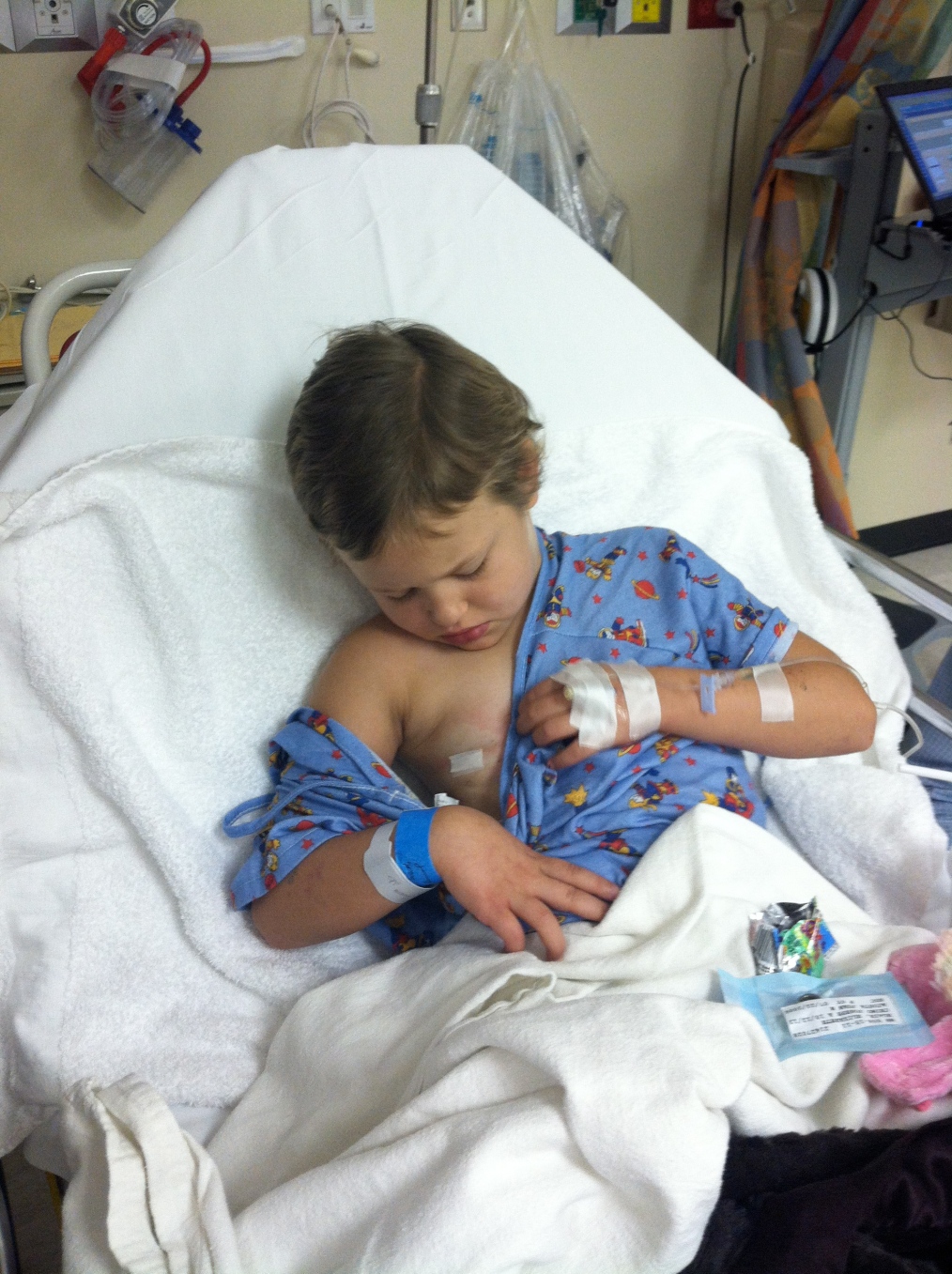 Elizabeth went to bed with her “a-port” tonight, not as a little button under her skin, just above her ribs on her right side, but in a sealed plastic wrapper holding it tightly in her right hand.  She refuses to leave it for the “other” port fairy to take.  She is experiencing what most parents would describe as separation anxiety.  It’s her baby and she is never letting it go.  She is already planning for a show and tell.  It was a super duper day!  But the cherry on top was when Brooke received an amazing phone call as we got home from the hospital yesterday.  It was Be the Match. 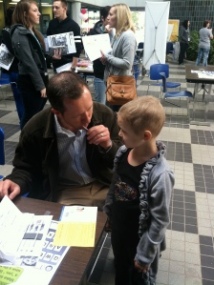 Be the Match is the registry that Brooke and I joined on Valentine’s Day last year.  We took Elizabeth with us as she watched Brooke and I swabbed our cheeks to enter into the Bone Marrow Registry so that we could possibly save a life someday.  Well, Brooke got a call yesterday that HE IS A MATCH and that someday is today for a 19 year old boy needing a life saving bone marrow transplant.  As of now, those are the only details that we have.  I have to be honest, there have been so many selfish moments over the last year that I have talked to God, gotten on my knees to him, begging and pleading to tell me why?  Why us?  Why our baby?  Why any family?  Why any child?  Do you know what he keeps doing for us?  Blessing us with the most amazing and most awesome blessings and people to help us every step of the way.  We have already been so blessed beyond belief, but to receive the gift to save a life is absolutely glorious.  God is good people!  God is all so good!  He did not bring this evil, but he is doing everything to help us through it.

If you would like to join the Be the Match registry, our friend McKindree is hosting a blood drive with swab kits available.  It’s free and you can absolutely save a life.  It’s important for you to know that it is literally 4 cotton swabs on your inner cheek.  If you cannot make it to the blood drive, you can also send for a kit.  Either way we encourage you to join. 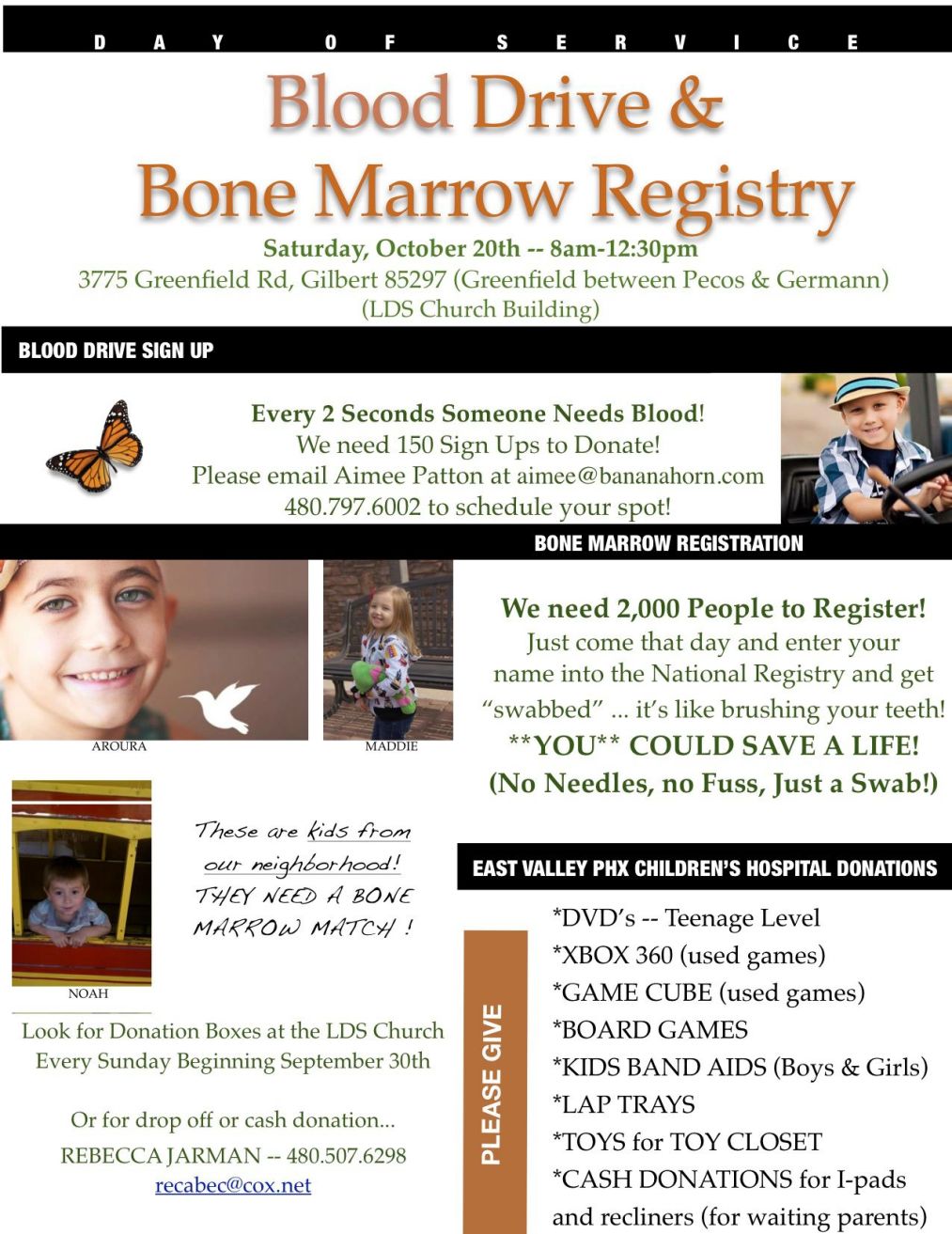 IF YOU GIVE A STAR A RAINBOW